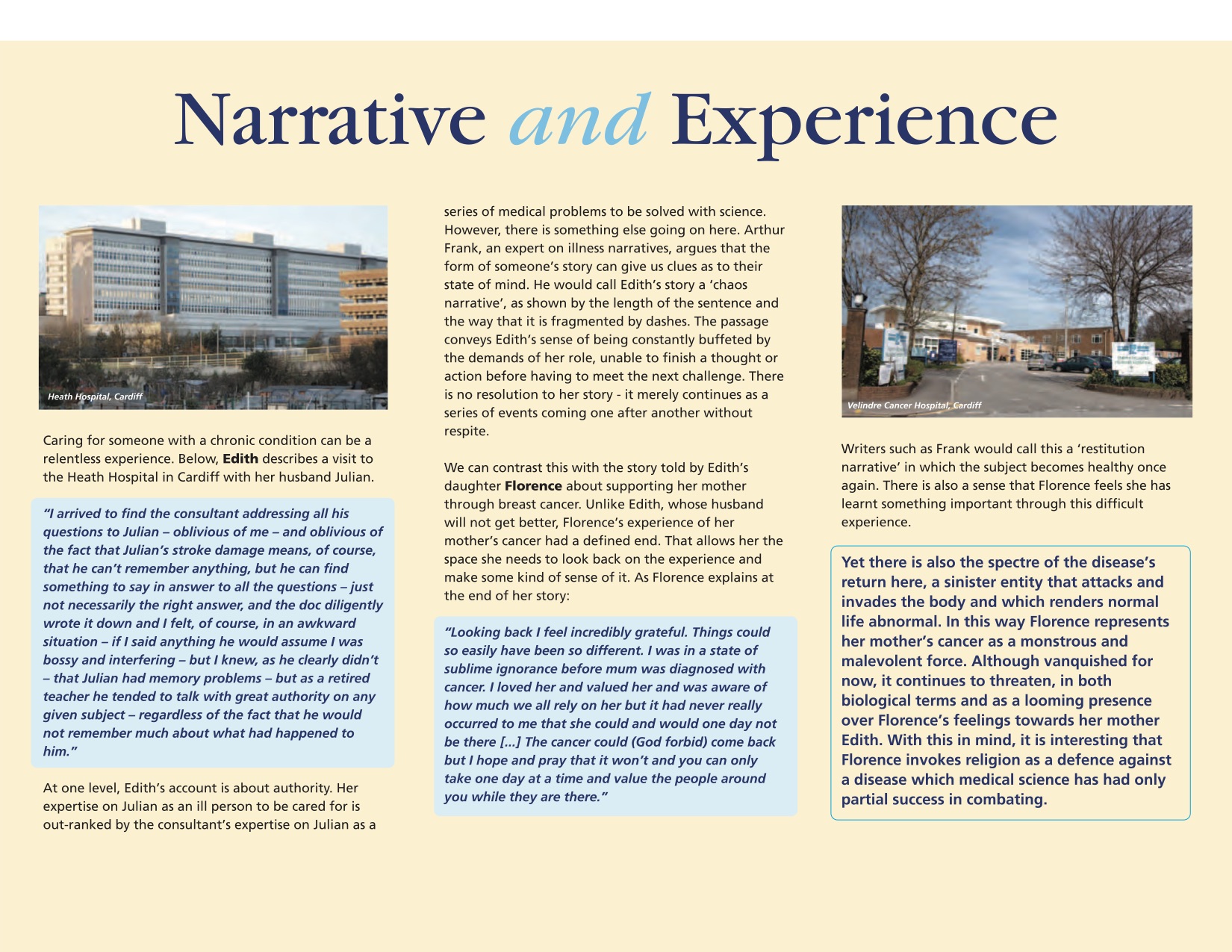 Caring for someone with a chronic condition can be a relentless experience. Below, Edith describes a visit to the Heath Hospital in Cardiff with her husband Julian.

“I arrived to find the consultant addressing all his questions to Julian – oblivious of me – and oblivious of the fact that Julian’s stroke damage means, of course, that he can’t remember anything, but he can find something to say in answer to all the questions – just not necessarily the right answer, and the doc diligently wrote it down and I felt, of course, in an awkward situation – if I said anything he would assume I was bossy and interfering – but I knew, as he clearly didn’t – that Julian had memory problems – but as a retired teacher he tended to talk with great authority on any given subject – regardless of the fact that he would not remember much about what had happened to him.”

At one level, Edith’s account is about authority. Her expertise on Julian as an ill person to be cared for is out-ranked by the consultant’s expertise on Julian as a series of medical problems to be solved with science. However, there is something else going on here. Arthur Frank, an expert on illness narratives, argues that the form of someone’s story can give us clues as to their state of mind. He would call Edith’s story a ‘chaos narrative’, as shown by the length of the sentence and the way that it is fragmented by dashes. The passage conveys Edith’s sense of being constantly buffeted by the demands of her role, unable to finish a thought or action before having to meet the next challenge. There is no resolution to her story – it merely continues as a series of events coming one after another without respite.

We can contrast this with the story told by Edith’s daughter Florence about supporting her mother through breast cancer. Unlike Edith, whose husband will not get better, Florence’s experience of her mother’s cancer had a defined end. That allows her the space she needs to look back on the experience and make some kind of sense of it. As Florence explains at the end of her story:

“Looking back I feel incredibly grateful. Things could so easily have been so different. I was in a state of sublime ignorance before mum was diagnosed with cancer. I loved her and valued her and was aware of how much we all rely on her but it had never really occurred to me that she could and would one day not be there […] The cancer could (God forbid) come back but I hope and pray that it won’t and you can only take one day at a time and value the people around you while they are there.”

Writers such as Frank would call this a ‘restitution narrative’ in which the subject becomes healthy once again. There is also a sense that Florence feels she has learnt something important through this difficult experience.

Yet there is also the spectre of the disease’s return here, a sinister entity that attacks and invades the body and which renders normal life abnormal. In this way Florence represents her mother’s cancer as a monstrous and malevolent force. Although vanquished for now, it continues to threaten, in both biological terms and as a looming presence over Florence’s feelings towards her mother Edith. With this in mind, it is interesting that Florence invokes religion as a defence against a disease which medical science has had only partial success in combating.